During my recent week in the Lake District I was having a problem with my right leg with pains around the knee. Some years ago I had an operation on that knee to clear out debris and it was (probably still is) a success. The pain indicates muscular/ligaments and I am now waiting for a doctors appointment.

Not being the most patient of people I went for a 20 mile cycle ride last Monday and all was well as cycling is not too much of a load bearing excecise. Then today I thought a short walk with Paul to view the Lliw Valley reservoirs would be useful to judge the knee situation. Just a niggle.

This area was new to Paul. The car park was busy with half term in full swing with good weather making an appearance. The autumn colours were on full show.

From the lower reservoir we walked uphill to the upper reservoir and onto the rough track for a short while. Thereis a route around the reservoir but that’s for another day.

We returned  the the lower reservoir and took the steps leading down to the river where children were stone hopping across and of course it was bound to happen one took a tumble!

The path we were now on was a  track until it reached the dam which we crossed back to the car.

This walk utilised our bus passes and we caught a bus from Pontardulais to Gorseinon. Clearly the bus company had not heard of the phrase “as the crow flies” as it wandered  like a drunken fly!

We did reach Gorseinon ans set off in a northerly direction following for a good way The Gower Way.

The “navigator ” had recently bought a new map of the area and this showed a disused railway was now a shared path nicely tarmacadamed which eventually led to a rough footpath/small river. Oh by the way the forecast of cloudy meant rain all day! 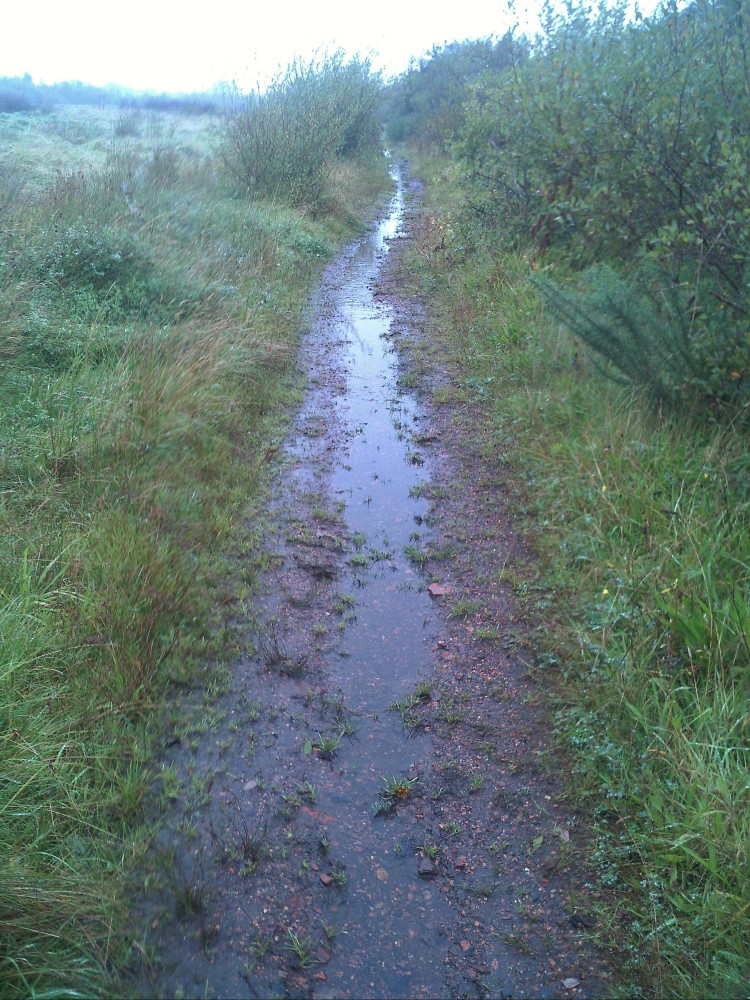 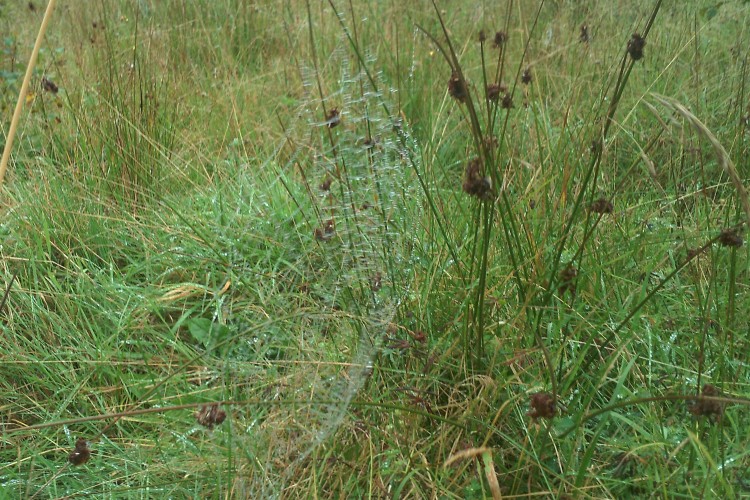 There is a cobweb here

We walked under the M4 and turned east and then north west back to Pontardulais.

My brother in law, Andy and I were due for our boys week and we started with a two day back pack on Mynydd Du and Afon Twrch and then climbing onto Cribarth and back to base.

The idea for the walk came from “Backpacking in Wales” published by Cicerone. This book is now out of print and there are no plans to update it, which is a shame.

We parked in Dan yr Ogof where we left the car for £3.00 per day which you have to say is a bargain. After a little faff we started up hill and along Fan Hir with great views opening up. 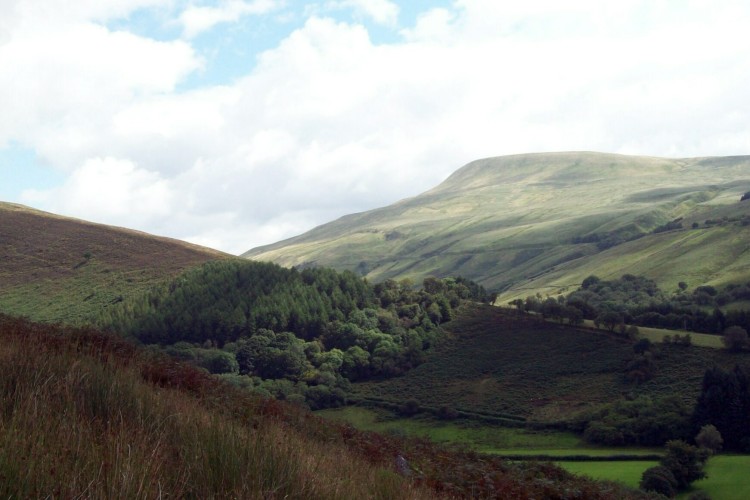 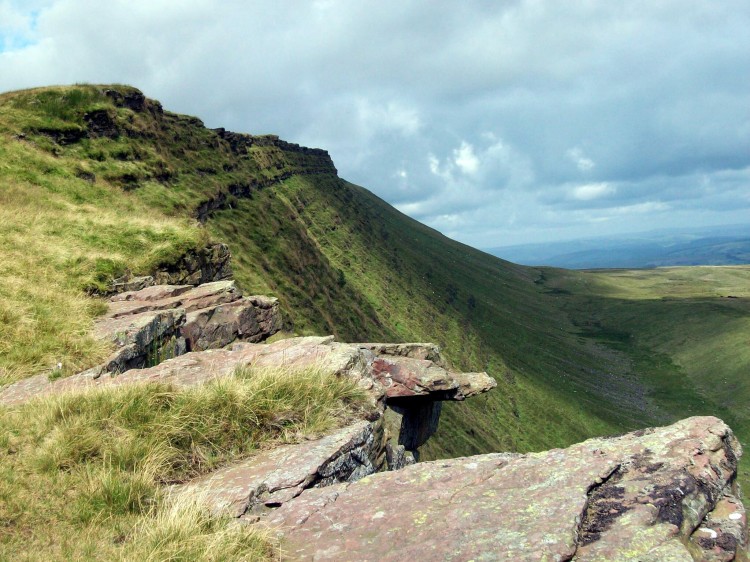 Corn Ddu and Pen y Fan in the distance

We stopped for lunch in the cairn on Fan Brycheiniog looking down onto Llyn y Fan Fawr. 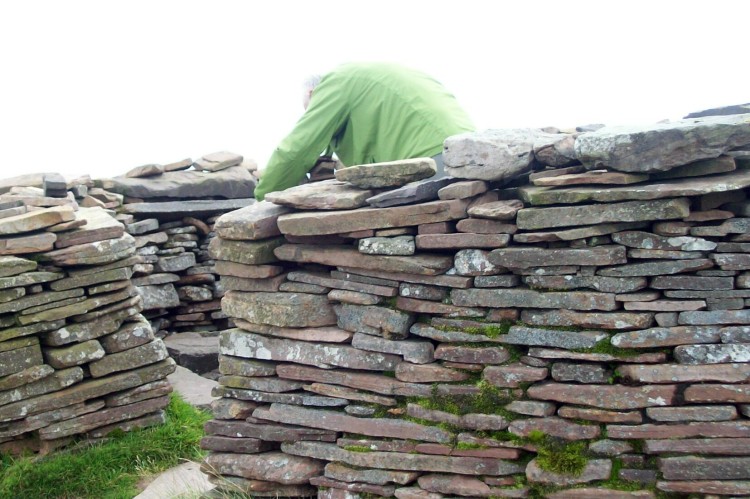 From here we continued around the escarpment to Bannau Sir Gar to look down onto Llyn y fan Fach and then on a compass bearing headed south west to the limestone ridge of Carreg Las. here there were some amazing formations. 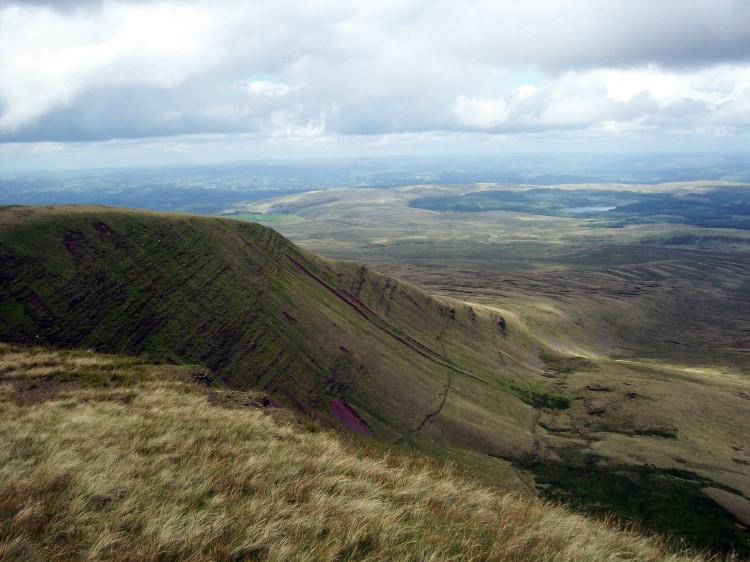 Usk reservoir in the distance 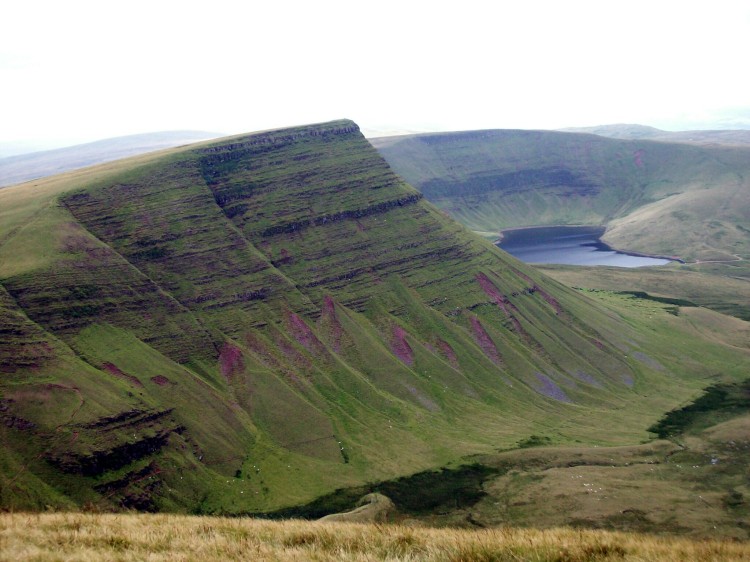 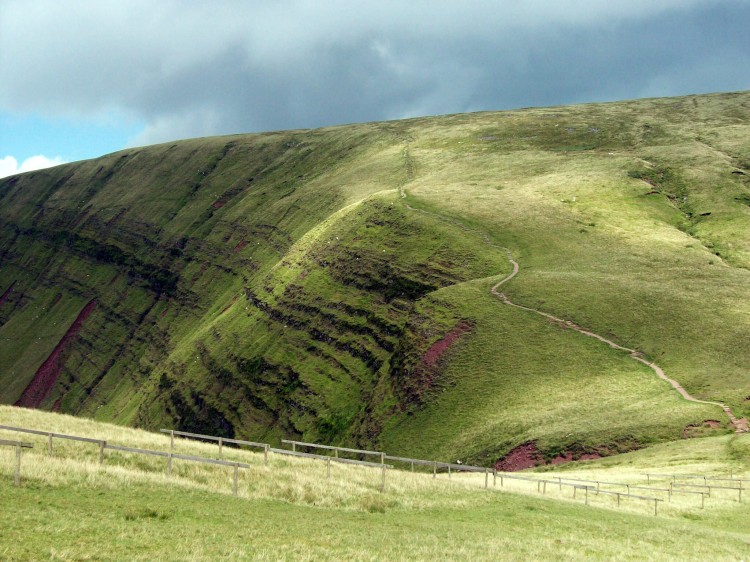 Looking back to our route 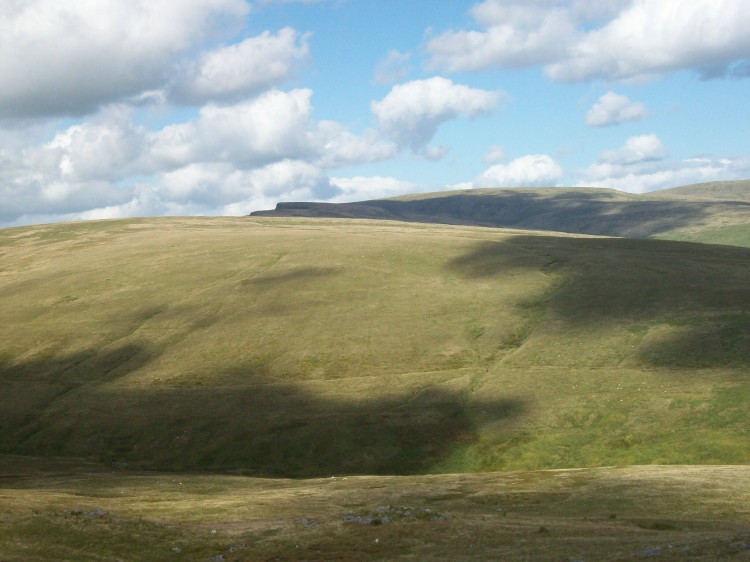 Looking back to our route

At Blaenllynfell we climbed steadily onto Foel Fraith and then south east to Carn Fadog before heading to our overnight camp alongside the Afon Twrch.

We had seen only one walker all day and were somewhat surprised to find as we reached the valley side of the Afon Twrch two tents where we expected to camp. We could also see the occupants skinny dipping in the river, clearly escaped nutters!

We had no choice but to descend and hope there was another spot for us. The descent was a nightmare through head high bracken and very uneven ground with no sign of any path.

As we reached the “camp site” one of the lads suggested there may be some spots further down stream BUT across the river. It was getting late now and with little energy left to explore for a narrow crossing we found a shallow area and just waded in. There is a theory that your gaiters are always an inch short of the depth of water being crossed and so it proved!

It was now 2000 hours and all we wanted was to erect our tents, eat and crash out.

The next day we broke camp and put on our wet boots and headed out of the valley. As we left we saw the other campers, towels in hand heading down stream for another swim. We lost sight of them but their screams indicated the water was a little fresh! 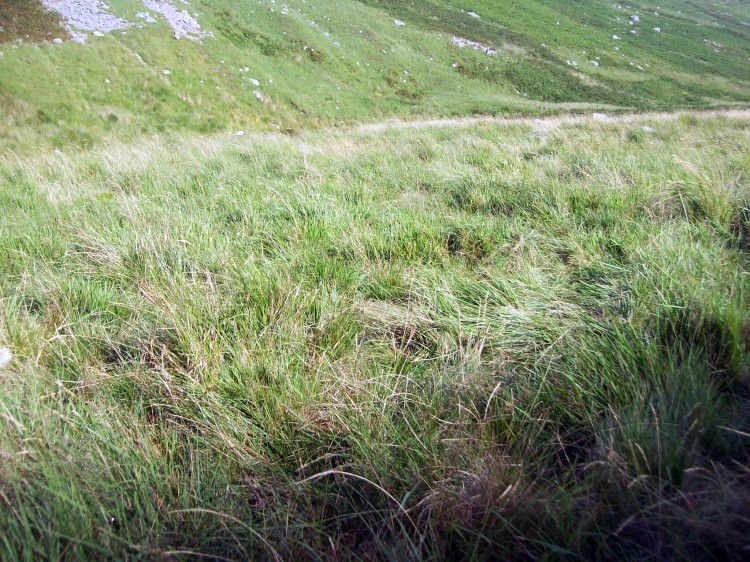 Shouldn’t they be in Scotland?

Our route was south and then east on good paths until we found a non existent path through a bog fest and woodland area. With trust in GPS and compass bearings we found our way to the marked picnic site at the junction of the Afon Giedd and Afon Cyw where we had a welcome lunch.

From here we were again on good paths which led through open land and up onto Cribarth and back to base.

The green path to Cribarth 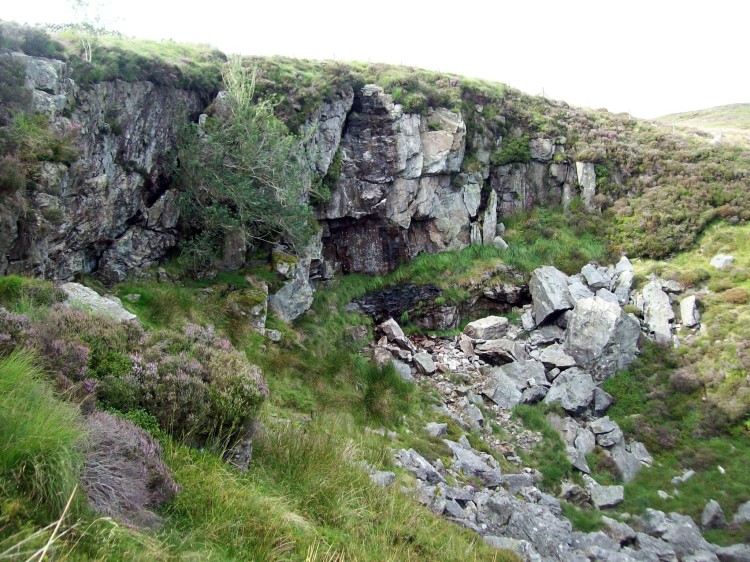 Signs of a good walk.

The “Navigator” decided on a linear walk today utilising our bus passes (all fully qualified!).

We parked the car in Pontarddulais adjacent to the bus stop and caught a bus to Gorseinon on a very circuitous route taking in most of the roads in the Gorseinon area.

We had been warned that although the paths were shown on the OS map there was a high probability they were not on the ground. However luck was on the “Navigator’s” side and the paths were there, most waymarked.

From the bus station in Gorseinon we headed south and then west towards Lougher joining a traffic free cycle track which led us to the Loughor bridge which of course divides Ospreys from Scarlets but not before a very muddy path.

Today was Friday but arrived at 1300! 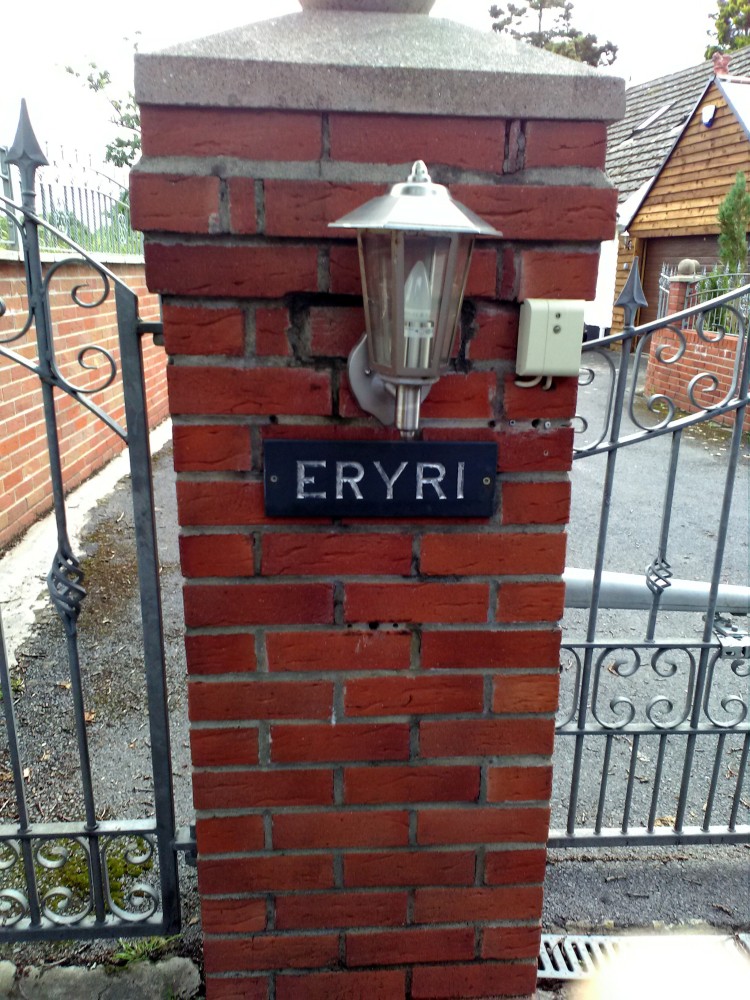 Unexpectedly we came across a lovely riverside path and park area with picnic benches and a view point. This had been financed by the plastic bag charge of Marks and Spencer. 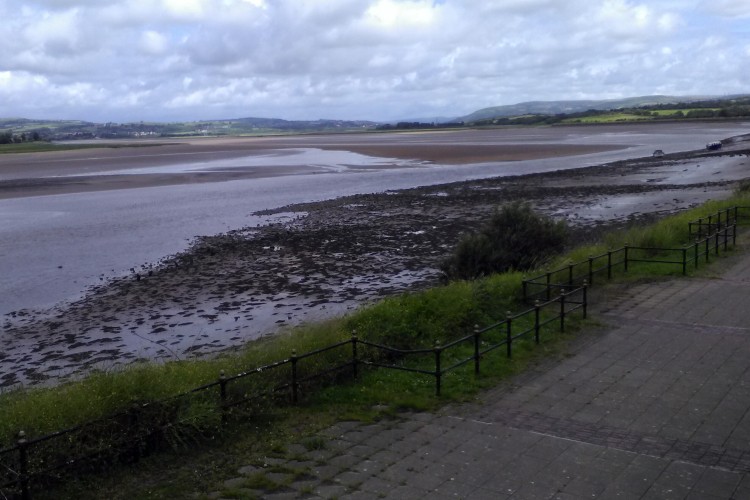 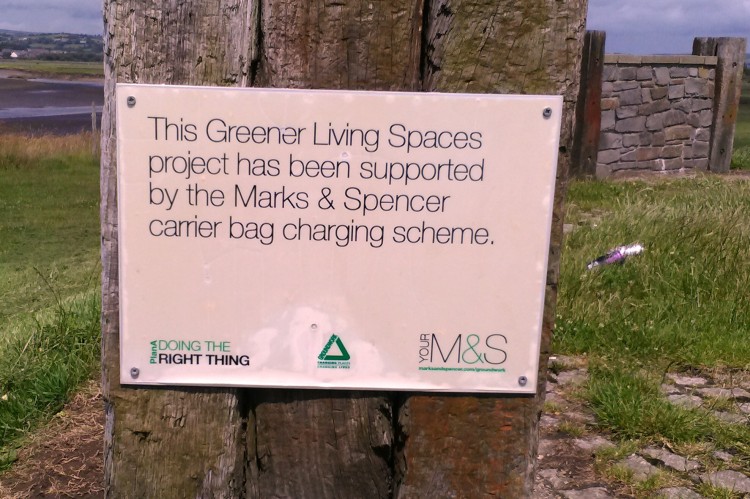 Not just any Greener Living Space …..

We now walked north and were pleasantly surprised to find paths and signs where it had been expected they would not exist. The route took us under the M4 to a bend in the river where an enclosed graveyard could be seen. The church had been taken down and rebuilt in the folk museum in St Fagans near Cardiff. 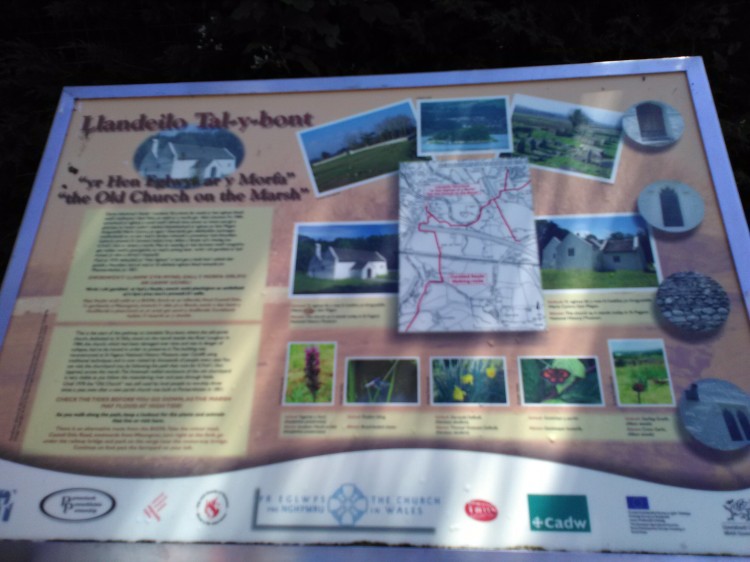 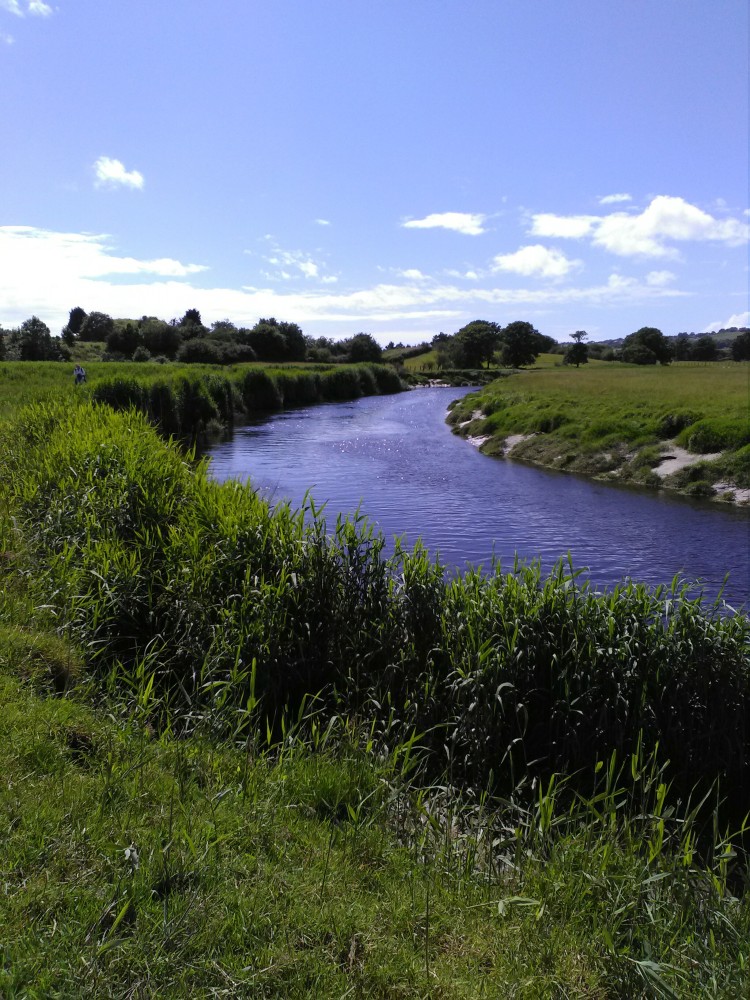 From here we walked through a park and back into Pontarddulais.

With the promise of tea and cake and the sun was shining I persuaded Mrs Bob to go for a walk.

We called at Many Tears and collected two of the owners dogs, Archie (no sight) and Custard an old timer and set off for the Lliw Valley Reservoirs not that far from junction 46 of M4 – look for brown tourist signs.

We parked up outside the cafe and  set off along the tar mac road which first takes in the lower reservoir and then eventually to the upper reservoir. 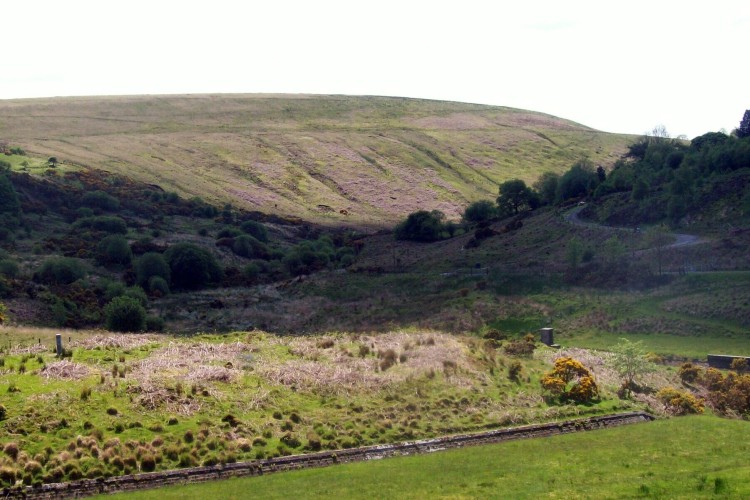 Looking back down the valley

There were lots of sheep around and Archie being unable to see was not too sure about their bleating but soon settled down. Whereas most dogs are sniffing close to the ground he sniffs in a 360 degree circle. Custard has seen it all before and is happy to plod along with the occasional lie down in a muddy stream to cool off. 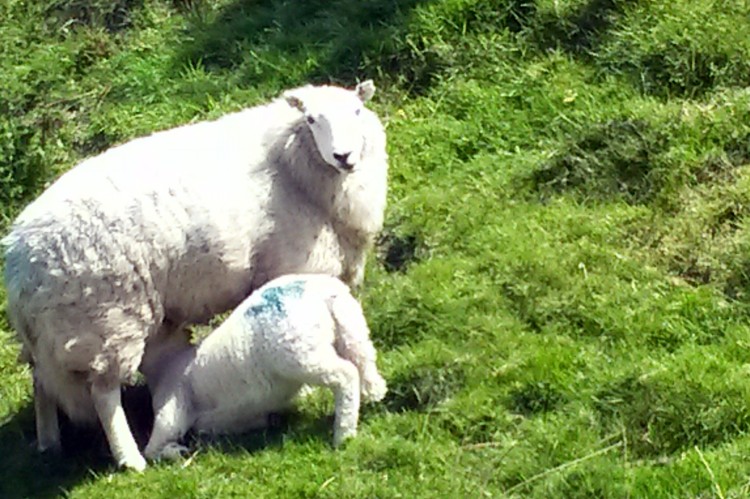 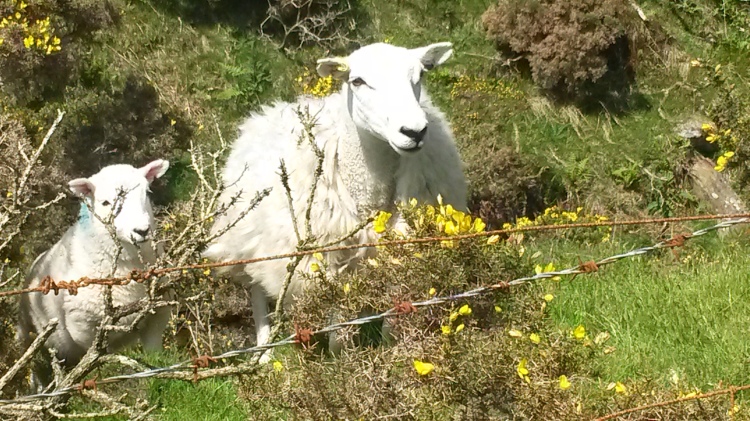 Archie is still young and like human nippers sometimes sits down and will only move if carried and seems quite happy to be transported that way – but not for long!

There and back took about a leisurely two hours before the reward of tea and cake back at the cafe. 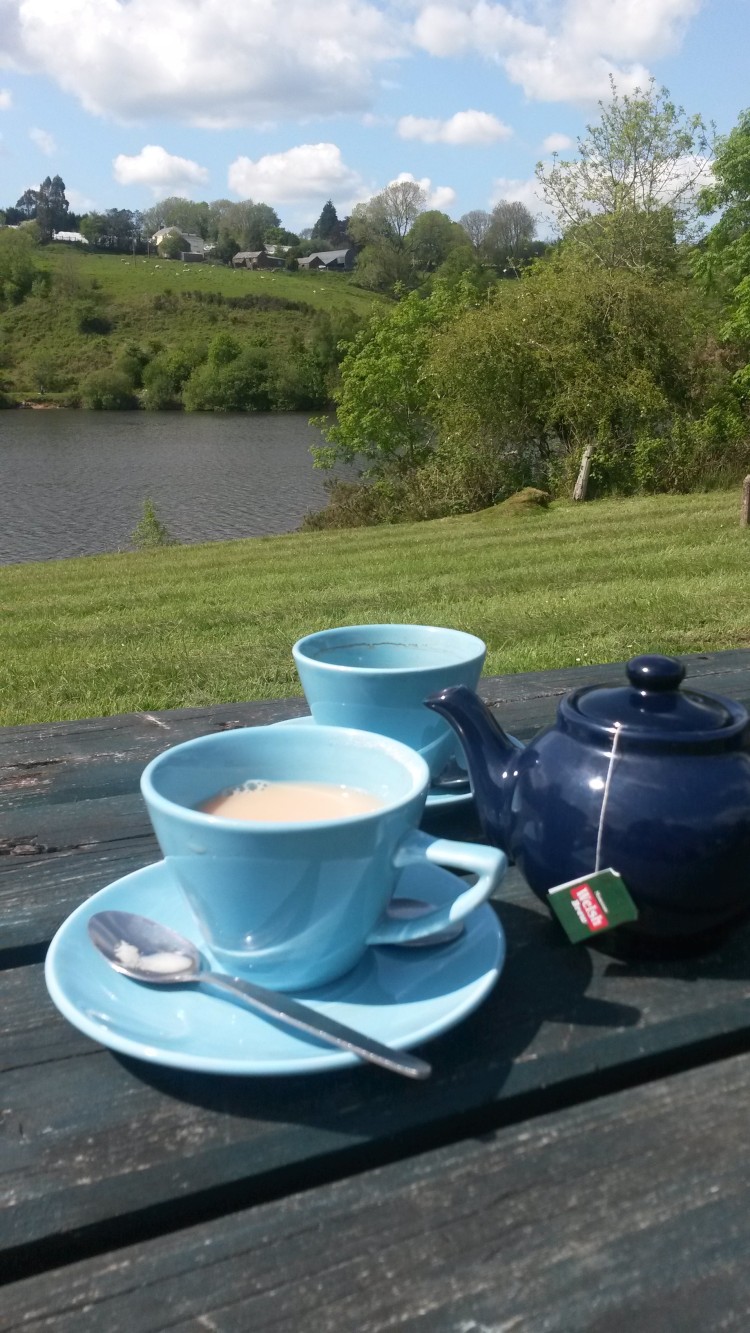 It’s not how you start but how you finish

There is an eight mile circular walk which takes in the higher moorland and a shorter walk around the lower reservoir. 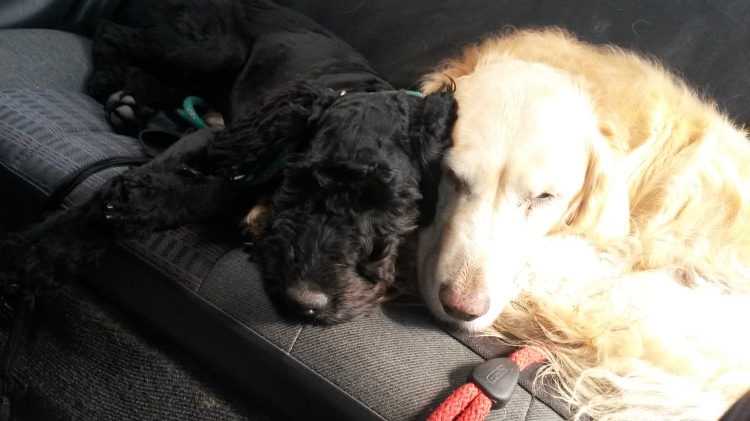 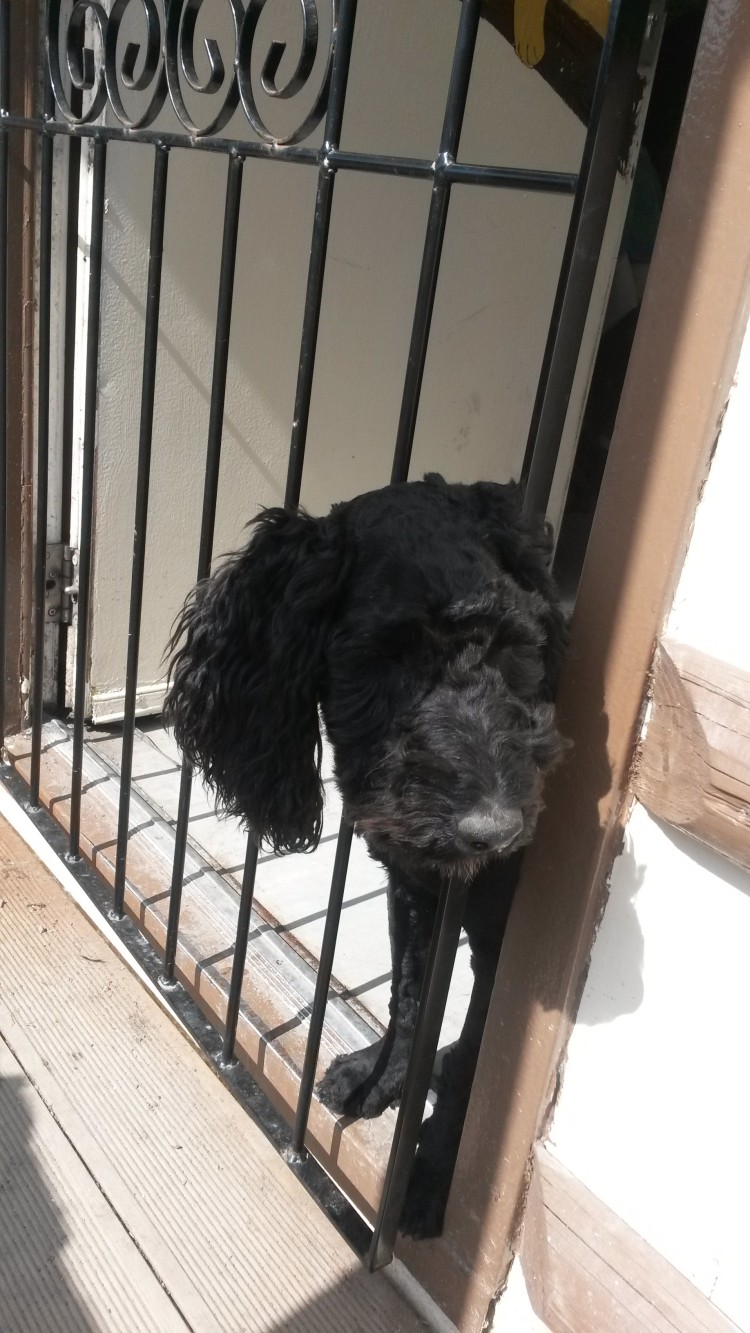