We had a visitor from Canada staying with us recently and we planned to show her the delights of West Wales and today it was to be the coast path from Caerfai Bay to Porth Clais and up to the City of St Davids.

This is one of our favourite short walks and we were keen to show it to Sue. She lives on Mayne Island which lies between Vancouver Island and the mainland. She told us the coast line there is much different.
We had the bonus of good weather!

We saw a number of groups enjoying,coasteering climbing and kayaking and of course fellow walkers.

At St Non’s Well, apparently a cure all, there was a group of people holding a religious meeting and a laying on of hands.  Lets hope it worked for them, but it never restored my hair. 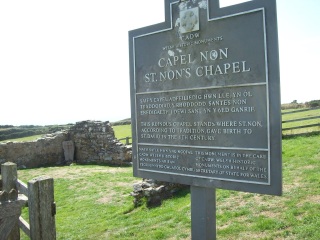 It seems that we hear a lot about young children not being allowed out to play and we saw an example of this at Porthclais where some mothers were continually shouting at their children who were trying to enjoy themselves paddling in the water. The mothers seemed more interested in gossiping and not helping the children enjoy a day at the seaside. Move on Andrews!!! 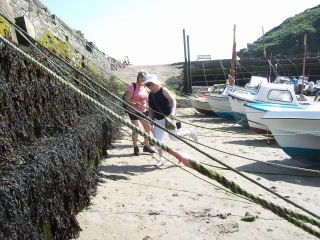 Anyway Sue had a paddle and we walked up the estuary for a cup of tea before continuing on to the City of St Davids.  We had a look at the Cathedral and some shopping to include a huge ice cream, before heading home via Morrisons to buy some quick nosh for a meal at home.

Sue enjoys cooking and caters for parties etc. Amazing what one can do with a chicken and salad followed by peaches in Grand Marnier