With the Navigator back from another foreign trip our Monday walks are back on.

The decision for this Monday was, in his words “an old fashioned coastal walk”.

A circular walk from St Brides, first inland and then back along the coast taking in Marloes Sands, Martins Haven, Musslewick and back to the car, almost 11 miles.

Mrs Navigator was not with us as she was nursing a bad back, so it was Paul, myself and him. Leaving Carmarthen it was pouring down but we had to believe the forecast which told us that Pembrokeshire would be bathed in sunshine – it was.

We parked the car in St Brides and headed inland towards Marloes Village where we had our first coffee break. 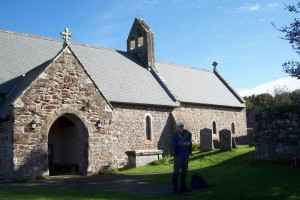 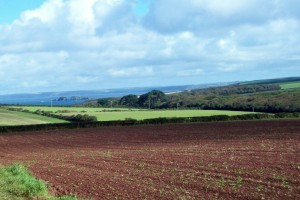 There is a clocktower here to the memory of Baron Kensington

From here we continued south passing through the old second world war airfield to the coast at the eastern end of Marloes Sands from which the tide was slowly retreating. A steep  descent to us to the beach where there numerous dog walkers, most other popular beaches in Pembrokeshire  have dog restrictions until the end of September. We now had blue skies and with a good surf running it was idyllic, Pembrokeshire at its best. Nowhere better for a lunch stop. 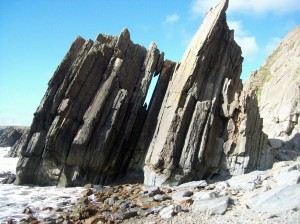 Looking back to Marloes sands

From Marloes Sands we climbed back up to the coastal path looking out at the islands of Gateholm and Skokholm. 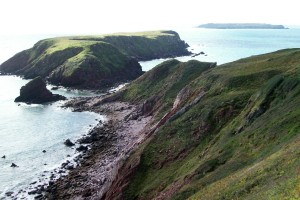 The path leads on to Deer island and around to Martins Haven and the view of yet another island, Skomer. At Martin`s Haven we met Iolo Williams the Welsh TV naturalist just back from a diving break.

He may well have been filming the seals and their pups of which there were many in the inaccessible  coves. 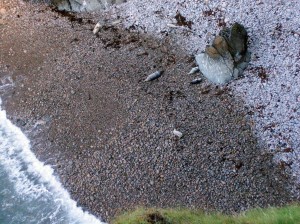 The sea views were just fantastic in the clear air, Pembrokeshire never fails to impress.

The other wildlife spotted were choughs and gannets.