We started with a cup of coffee in the cafe next to the castle and then set off skirting the castle with the Afon Gwendraeth Fach on our right. 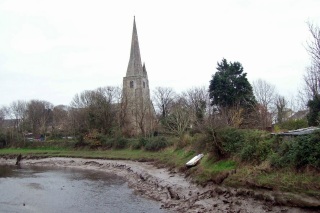 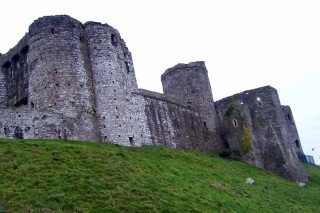 The route then took us onto Mynyddygarreg with fine views all around to include the hill on the other side of the main road where we would be heading to.

Descending  from Mynyddygarreg we passed by the ruin of Maes Gwenllian and onto a a minor road passing Capel Horeb an imposing red brick Methodist chapel.

Continuing down we came across a small holding with what appeared a large area for growing vegetables contained in a walled area much like a drained swimming pool. The veg was growing in raised beds  formed from numerous old tyres.

As we were having lunch the owner came past in a car and stopped for a chat. He told us the garden used to be a small reservoir which fed the gunpowder works in Pembrey.

Following lunch we crossed the main road and headed uphill to eventually descend again into Kidwelly. Throughout the walk we walked along a number of splendid green lanes, some like tunnels covered in the recent autumn leaves.