As pay back for my away days, my wife and close friend flew off to Tenerife, not a walking boot or bike between them.

It was my job to transport them to the impressively named Cardiff International Airport and so as not to waste the day, I took my bike with the plan to cycle part of the Taff Trail and around Cardiff Bay

Parking was on my mind but there was free parking in a large car park adjacent to the International Swimming Pool and the Whitewater Centre in the Sports Village.

The Taff Trail was signposted but because of various street works it was not that obvious to start with but I was soon cycling alongside the Taff passing the Millennium Stadium (no Six Nations Cup this year), into Bute Park, Pontcanna Fields and past the The Swalec Cricket Stadium. 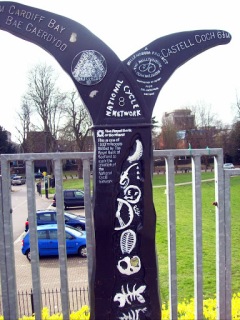 My goal was Castell Coch and after a flat ride it was a struggle up the steep hill to view the castle.

Photos taken I retraced my steps to the Bay but then went clockwise to circumnavigate the Bay passing the Millennium Concert Centre, impressive sculptures, the Norwegian Church and  crossing the Barrage back to the car via Pont Y Werin. 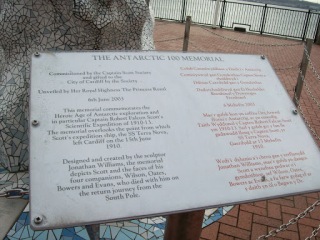 The whole of the Taff Trail is on my tick list and hopefully I can delete this later on this year.