With the forecast looking favourable the Navigator decided on heading for the hills and the peaks of Yr Eifl.

On the way I realised that I had forgotten both my camera and mobile phone and so the photos below are taken from a distance on a different day.  Googling “Yr Eifl” will bring up plenty.

We drove through Llithfaen and parked up at the signed car park on the road which leads down to Nant Gwrtheyrn, the Welsh Language Centre.

The obvious track leading north east was followed to Bwlch Yr Eifl overlooking the quarry workings. One of the blogs I had read indicated that the way up to the hill on the left was fenced off but that is not the case now. We walked up the concrete steps which leads to a mast and turned right and scrambled up the rocks to a path which leads to the top where we had coffee and enjoyed the views north along the coast and Anglesey. To the east we could see snow on the far tops and on our next objective, the main peak of Yr Eifl. 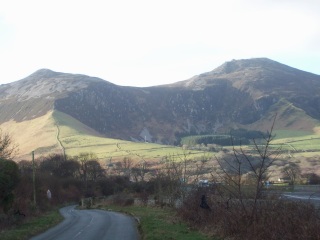 Down at the Bwlch we started the climb walking through snow and unfortunately mist which would block up the views from the top. The trig point at the top includes a metal sculpture which I have failed to find the meaning of.  It was windy up here and we descended to find shelter to have lunch.

Down we went again only to climb again to the interesting top of Tre’r Ceiri a well preserved stone fort with numerous hut circles still visible. We spent some time here exploring the fort before heading south west back to the car.