The “Navigator” was back from the Austrian mountains and ready to explore West Wales again. The forecast was grim for Monday morning but clearing after lunch and into the evening. The plan was lunch at the “Navigator,s” and then the walk.
Route

As we drove towards Scleddau the rain eased and off we went following the path past a sad unloved church which nature was doing its best to cover.

The route took us to Trecwn an ex MOD base. It is now in private hands with numerous “private” signs. What are they hiding? Thankfully we did not meet any scary men in black and carried on our way. 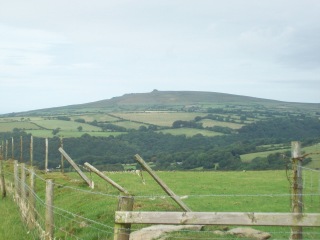 Llanychaer in the Gwaun valley was the next destination with a pleasant riverside walk. Up to now the paths were clear and fairly well signposted.

This was about to change. The waymarked stile gave us confidence, but there was no note suggesting that walkers would be advised to carry a machete! This short path was totally overgrown with brambles and the like. By the time we realized this was stupid we were halfway through and it would be just as painful to carry on as go back. With some relief daylight appeared with a nice grass covered path by a property known as Llanwern and where the map indicated a path we required. Once again the reality did not match the map.

We followed another path which matched the map and which led us back to Scleddau.

No doubt the ” Navigator” will remind readers that it was my choice to take the route which led to the battle ground mentioned above, mea culpa!