My good buddy, Merv. reached his 60th in July and as a present we bought him (and me) a trip to Ramsey Island in Pembrokeshire. This trip included a guided walk by the resident RSPB warden taking up the morning and then free time in the afternoon.

The forecast was looking good and a phone call on the day before confirmed, as of then, that the trip was on.

The boat leaves from St Justinians and with limited parking we arrived in good time and with a full complement we set off at 0930. 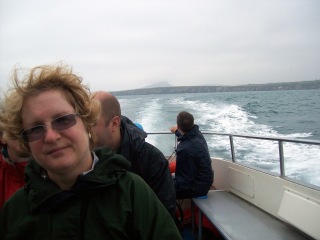 Ramsey Sound has a deserved reputation for being a dangerous stretch of water for the unwary, but the boat crew are all volunteers on the local RNLI boat and know the waters well. One odd instruction we had to obey was to show the crew member, by positively rummaging in our bags to check we had no mice or rats hiding therein! The reason for this is that Ramsey Island is now a rat free area after a determined effort to eradicate them. The result of this is an increasing population of ground breeding birds.

Once on the island we met with the warden, Lisa and off we set. It was explained that most of the sea birds had now left the islands but there would be other species to see, hopefully.

The first spotting was a little owl which hunts during the day. Here on Ramsey it likes to spend time on the numerous dry stone walls and that was where it was seen.

The most common animal we saw was the rabbit. There are hundreds,  their ancestors being introduced a long time ago. There are no ground predators with only gulls and the like bring of danger. We did see an albino rabbit and it seems it has survived as the birds probably think it`s a stone!

Lisa was hoping to show us a very early seal pup, the first born this season, but although the mother was visible the pup was probably hidden inside the cave. Lisa went on to to tell us a lot about the seal population and the importance of Ramsey to the breed. Throughout the morning we saw lots of seals that were congregating at the various beaches. 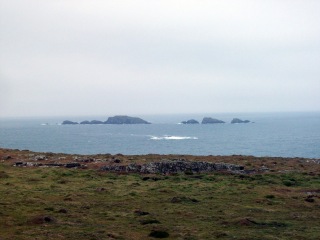 Another unusual spotting were a couple of red deer stays. Lisa had to point these out as they were lieing in the bracket with just the tips of their antlers on view. Lisa also pointed out the rare Golden Hair lichen below

There were 3 stags and about 7 hinds left over from those imported by the previous owner of the island. Merv and I were lucky to see the stags standing up later in the day.

We also saw some peregrines, choughs and kestrels.

The walk finished back at the farm house where we ate our sandwiches and then had some free time to explore other parts of the island before catching the return ferry. 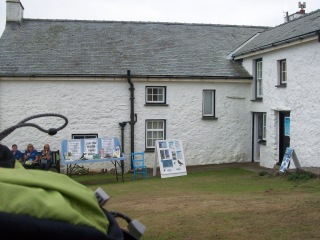 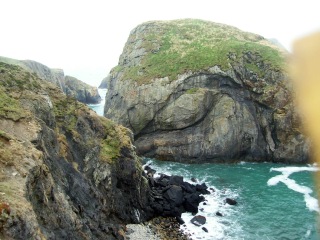 An enjoyable day finished off with a pint and a meal in the Farmers Arms.