The week commencing 14th July was to be a “boys week” for my brother in law and me where we hoped to walk, canoe and cycle. Amazingly the forecast was for sunshine all week.

The plan for Sunday and Monday was for a backpacking trip from Fishguard to Newport. The car was parked near Poppit Sands on Allt y Coed camping site where a small fee was charged.. I had left Andy at the cafe where he consumed two ice creams!

We caught the Poppit Rocket Bus for the trip to Lower Fishguard via all the small coastal villages. We had lunch before setting off on our route north

The weather was clear with good views all day.

The headland of Dinas Head eventually came into view with a decision to go around or through the neck which joins Pwll Gwaulod to Cwm yr Eglwys. No decision really we took the long way. 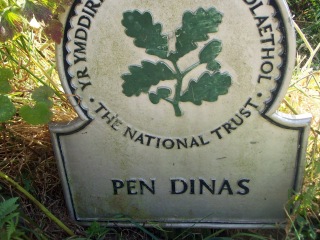 At the summit we could see Newport and near there was our overnight stop at Ty`r Canol. As we walked to the site the owner told us to set up wherever we liked and he would come around later.

Tents up and food consumed we had a welcome shower. About 1000pm the owner came around and offered us a a few fingers of a very nice whiskey! An excellent end to our first day.

I was awake early on Monday and the weather looked good – it was not to last. We packed up and headed down to the beach and with the tide just starting to come in we decided to wade across the river to avoid the long walk to the bridge.

As we headed around the golf club and to the north side of the bay the sea fog came in and stayed with us until just before Poppit. As you start this stretch of the coast there is a warning sign about the difficult territory to come. Take notice as it is correct. Lots of up and the path is overgrown in lots of places.

We had lunch at Ceibwr Bay and shortly after walked past the magnificent “Witches Cauldron”, a collapsed cave. I have canoed into this on many occasions.

From here the path seemed to go up and up. As we rounded Cemaes Head the visibility cleared with cloud inversions and with views of the Teifi estuary.

We loaded the car and headed for the cafe and a celebratory ice cream.

2 thoughts on “Lower Fishguard to Poppit”