I had just had a week in the flatlands of Norfolk and needed some “up” and The Navigator had just returned from a somewhat damp period near Machynlleth and needed some sun.  One of us was to strike lucky.

The usual Sunday conversation led to a trip which would take in Llyn Y Fan Fawr returning via the ridge on Fan Hir.

The forecast led us to believe that there would be broken cloud, no rain and light winds. I have an idea for saving the country lots of cash and that is to shut the Met. Office and supply every household with a bunch of seaweed.

We set off  from the small church just up the road from Dan Yr Ogof and joined the Beacons Way and followed the Nant Tawe Fechan, where we had our morning coffee by a lovely waterfall. Our route then took us north underneath Fan Hir and on a small ridge leading us to Llyn Y Fan Fawr.  Lunch was consumed here. 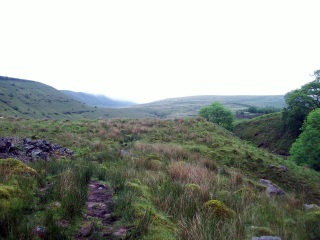 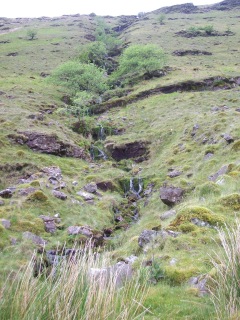 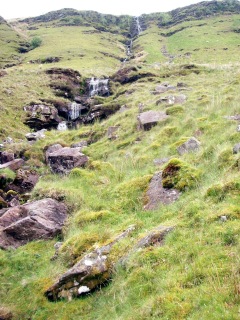 From here on the weather deteriorated with the mist heading our way and which enveloped us as we climbed
up towards Fan Hir on an engineered path, but passing on our right a recent landslide.

As we neared the top, three walkers, who we had been following most of the morning asked us about the route on Fan Hir as they were unsure about carrying on in the mist and now windy conditions.

We explained the path is clear on the ground and providing they stayed clear of the edge they should be fine. We kept together for a while but they sped on once it was clear the route had become obvious.

Our pace was slower and we still had the afternoon tea break to come. As we started to descend the mist began to clear and before long the wet weather gear was again in the rucksacks. 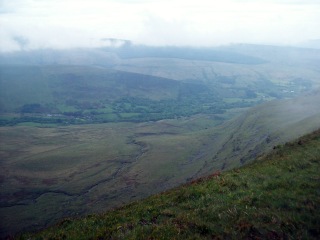 The other party could now be seen heading for the road and we were relieved they had not walked over the cliff!

The lucky one was me as the walked included some up, but Mr & Mrs Navigator did not have the bright weather hoped for – there is always next week.