On a number of recent bike rides from Llansamlet to Ystralafera we have seen a hill which is called Mynydd Allt y Grud and I have mentioned this to “The Navigator”. Lo and behold he devised a route to take in this top

We parked the car near the bike trail and read the information panel which seemed to indicate that all the footpaths are open. Don’t believe all that you read. 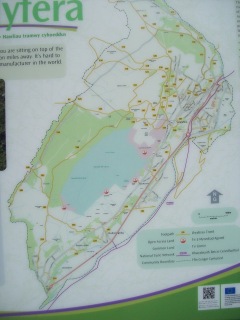 It started well with early indication that all would be fine. However we soon hit problems as the first farm had a notice indicating that trespassers would be shot and survivors shot again. We met the owner and she was friendly enough. Walkers had not seen the correct path and would wander  into the farm and hence the notice. If a more  prominent sign post  was erected there would be no problems.

At the next farm on the path there was no signage. However the owner directed us to a farm track leading down to what appeared to be a quarry road.

We had hoped to take the path to Pistyll Gwyn but there was no path on the ground and so we continued on the main track leading through the wood.

At the end of the wood we spotted the track leading uphill to join the upper footpath passing the ruins of Coedcae Mawr and Tir Gawr where we stopped for lunch.We then carried on along the path to join the path leading to the top of Mynydd Allt y Grug.

It seemed that this was the playground for 4×4`s and although there were excellent views it was rather scruffy.

We continued a descent heading south west hoping to find a clear route next to the intake wall staying on the open access ground. It was not to be as it was covered in brambles.

A decision was made to trespass and head towards our earlier way up. We were spotted by the farmer who was clearly not happy with us  and we were directed back up the field to the correct path.

There were no further incidents and arrived safely back at the car after visiting Godre’r Graig Park.