Unfortunately for Andy who had returned home on Tuesday night, the forecast for today was looking much better, albeit still cold.

The Navigator’s plan was for an ascent of Manod Mawr which overlooks Blaenau Festiniog.

The day did not start well for me as I discovered that my flask had leaked its whole contents into my rucksack.(The leak I discovered later that evening was my fault.) I would have to be polite to The Navigator today as I would need to share his hot drink.

We parked in Manod Village and headed for the paths which would take us to the bwlch between Manod Bach and Manod Mawr.

There was more snow on the ground than we had seen in previous days and as  we climbed the inclined path  past Llyn-y-Manod it became deeper,  perhaps leaving our microspikes back at base could be a mistake. There were good views over to the Moelwyns and the Stwlan Dam and down to Blaenau Festiniog. 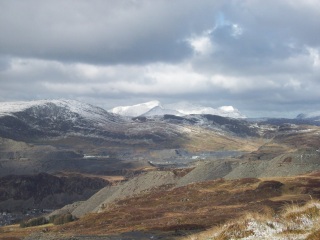 Near the top of the path we heard what seemed to be siren and then saw a sign explaining that when it stopped an explosion may follow! We did wait but heard nothing more. As we reached the top of the path there was clearly work going on with a large quarry lorry and digger in sight.

Before the climb to the summit we stopped for lunch, sitting in the snow.

Although the height of Manod Mawr is moderate the views are well worth the climb.  It was again windy up here. We retraced our steps to the quarry road as the direct route south from the top would lead to an unfortunate end! 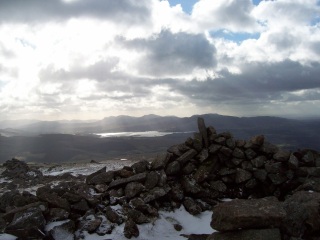 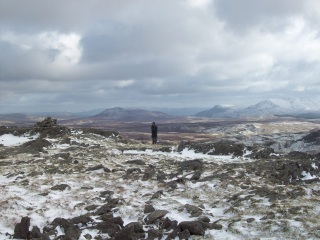 The track led us down to Cwm Teigl and a minor road.

We left this to take a footpath past Caecano Mawr and back to the car.