Little yellow suns all over the weather forecast and Wednesday looked good for a walk in the hills.

My neighbour, Paul was in agreement and we set off for a walk new to him.

We travelled through Llangadog on the road to Upper Brynamman and parked at the middle carpark.  We had been beaten by a number of army vehicles, whose passengers we were to see layer that day.

The weather was cold with a brisk breeze but we were suitably attired. We set off on the Beacons Way for a short while onto the cairn on Foel Fawr with extensive views.

The next target was the unnamed  peak just east of south shown on the map as “cairn” and a height of 616 metres. We stopped here in a small shelter for elevenses before setting off for a down and up to Foel Fraith. There were good views over the valley of Cwm Sawdde Fechan onto the Carmarthen Fans.

In the distance the peaks of Pen Y fan and Corn Ddu could be seen.

After leaving Fan Foel we headed north towards Cefn y Cylchau passing some huge shake holes. Near the top we had a fairly quick lunch and then headed south westish taking in Cefn y Truman and then down to Afan Clydach.  We were able to easily cross this river someway above the waterfalls, despite all the recent rainfall. 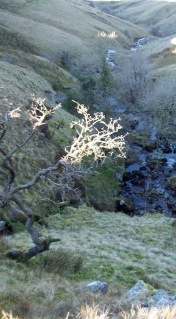 A quick look was made of the waterfalls and then uphill to the abandoned quarries.  Just before setting off  the troop of young army men marched very quickly passed us each with a huge rucksack – over nighting the night before?

These quarries must have been a huge concern when they were in full flow. The old lime kilns are large and still contain the furnaces.  I understand that these may in due course be renovated as an attraction. 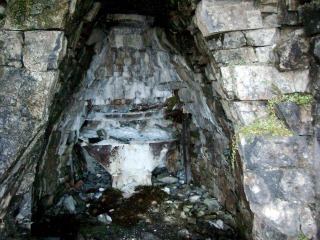 There are no information panels at the site but at the first car park there is a snippett. In this car park we were met by a small but heavily coated pony who clearly had no fear of humans and was happy to be smoothed.  Unfortunately for him/her we had no food for it.  Another pony was doing the same thing by another car.  Hope springs eternal.

I think this could be described as the first walk of the winter season.  Lets hope for more bright cold days ahead.