Our last day was planned to finish on a high with a Newlands horseshoe.
The forecast was good and held true. The walk would take in Hindscarth via Scope End, onto Littledale Edge and return via Robinson.
Route
We parked the car near Newlands Church and then headed for Scope End via Low House Farm. There were good views north and we could see walkers ascending our proposed down route from Robinson. 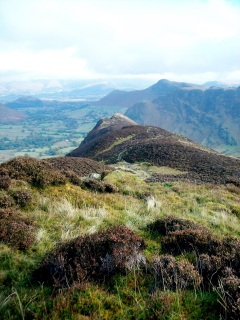 There was alittle hand on rock as we climbed higher to Hindscarth with a couple of false summits to face.

At the top we had lunch in the cairn as there was a cold wind blowing. Following the food we walked beyond the cairn to look down the Honister Pass and to Buttermere.  In 2010 we were walking this area and looked again at Fleetwith Pike and Haystacks. 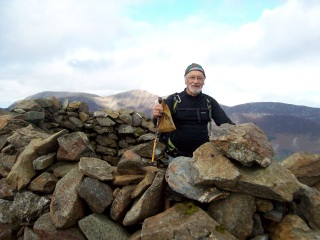 The Navigator was considering whether to alter today’s plan and instead of Robinson return via Dale Head as there is less descent and reascent but that summit was regularly covered in cloud and we stuck to our (his) plan.

The walk along Littledale Edge was fine and the hills to the south of Buttermere gave possible plans for another year.
The pull up to Robinson went well and as we walked north west we could see our base at Keskadale Farm.

Up to now the walk  was relatively easy but the terrain changed on the descent to Blea crags.  This was an awkward downward scramble on slippery rocks not at all pleasant.  It was slow going with a sigh of relief when flatter ground was reached.

The rest of the walk was  down High Snab Bank and back to the car via Low High Snab.
Overall a good 7 days of walking with my knee behaving as I would wish.  Just the 7 hour drive home on Saturday.
Thanks to Mrs Bob for letting me out to play, to Mrs Navigator for the stew and of course to The Navigator for getting me around safely.