We were walking by 0915 and the day started very autumnal, with mist in the valley and trees showing numerous colours. 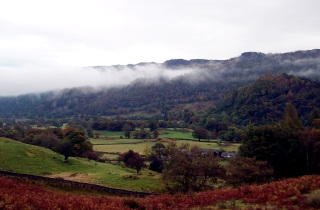 Route
We parked near the Borrowdale Hotel in Grange and took the footpath opposite. The waterfall shown on the map was visited and then up to Cockley How  for an early coffee and views back into the valley.

The route continued up and below Low White Rake and then  Nitting Haws although at first glance there was no obvious way though the rock formations.

From there we were led onto the ridge which joins High Spy and Maiden Moor.
As we had made good progress we turned south and headed for High Spy passing the impressive cairn and looked for a lunch stop out of the wind.

There were some good views from the top and after “The Navigator” pointed out the various fells (I believed him) we returned to the ridge and headed for Maiden Moor. 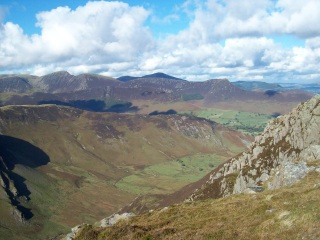 The green line was followed for a short time but we walked a little east to the dotted line shown on the map and headed to Hause Gate
Our route was to the south east towards Manesty and back to the car.