For some time now I have been reading the forum on Outdoors Magic (OM) and thought it would be an idea to join one of the meets. Since Easter I have been crocked with a knee problem but following an operation good progress was being made and I made the decision to join the Brecon meet which was to be based at the Dan Yr Ogof  campsite
I was looking forward to this year’s first spot of camping and I can recommend the site.  Good pitches and facilities and a restaurant on site.  Not far away a pub with real ale and food.
The tent was erected and after some introductions the early birds set off for the pub, where near to closing time some more from OM joined us.
Saturday started misty with the clouds below the tops and after a leisurely start – some had made the decision to start the day with a Welsh fry up in the restaurant, we set off to walk the ridge taking in Fan Hir all the way to the end above Llyn Y Fan Fach.  The route back was south to join the bridleway which led all the way back to Dan Yr Ogof.

My pace is basically a steady plod and regular stops on the way for photos and food.  I was not sure how this would fit in with those I had not met before, but there was no forced route march.  We even had time for a short snooze in the sun. 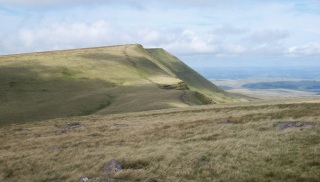 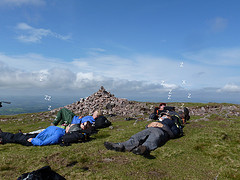 We had been warned that with all the rain we had had in recent days there could be a problem crossing the Afon Twrch but feet were kept dry. At grid reference 807191we came across a swallow hole which was too tempting for some to have a an explore.  A little further on we came across a number of cavers who were exploring in more depth and were excavating inside a hole hoping to find a way through.  This is one pursuit I have no interest in!

We then followed the path and arrived back at the site to find a few more arrivals.
Following a shower the BBQ was lit and a feast of meat was devoured. The night ended with a spectacular firework display as the site was celebrating 100 years of the caves being discovered.