With a good weather forecast happening today and going rapidly down hill for the rest of the week, today was the day for the bike.

I decided to visit the Millennium Coast Path and continue on the route to Lougher Bridge and back.  This is also the Bike route number 4.

I parked the car near Sandy Water Park and set off, passing the lake and then onto the path proper.

Once past the Discovery centre (North Dock) I was  to be on new territory, neither having walked or biked it.  This area is generally known as Machynys.

I crossed over the watery bits via two attractive footbridges and headed east with good views towards the Gower.

The tide was way out and in the distance cockle pickers were at work.  On my return one 4 by 4 came up from the beach loaded with sacks of cockles.

The coast path, which now forms part of the Wales Coast Path takes you along side some nice (probably expensive) houses which are adjacent to the Nicklaus designed golf course. I saw a number of players and others sunning themselves on the veranda of the club house.

Near here there were a number of interpretation boards which showed the history of the area, some of which went back to the 1600’s’ and the sad demolition of a local hamlet “for improvement”. 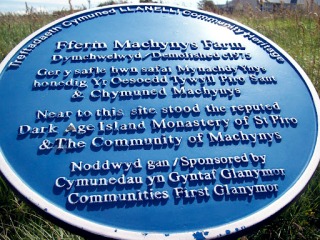 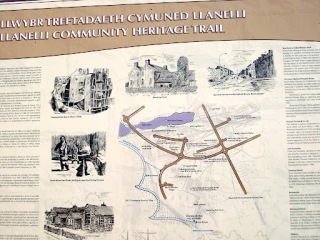 Pedaling on I came to the  Wetland Centre which is worth a visit. 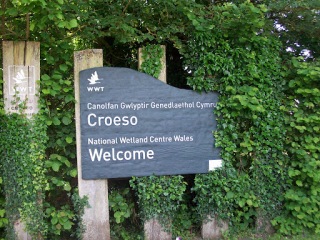 It was here that I met my neighbours, Paul and Angela who were just starting out on a bike ride but going the other way.

I kept on going east to the end of the Millennium path but carried on, on route 4 to the Lougher bridge.

I turned around here and headed back. I did stop for a break by a lake overlooking the golf course and then again at the Discovery centre for a well deserved  Mr Whippy ice cream. 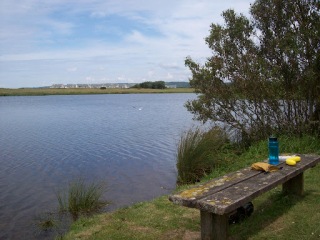 Again the path was well used with lots of cyclists including two who judging by the kit carried were on a tour.

This a lovely area to ride with good under wheel conditions and no hills!