With British Summer Time just starting and a weather forecast to match, the Navigator suggested a coastal walk.  No argument from me.

We parked the car at the front in Goodwick, free parking until 1st April.  The plan was to walk inland and then return on the coast path.

From the car park we headed uphill on footpaths in the general direction of Llanwnda.
The next photo will bring a smile to canoeists.

Unfortunately it was next to an ornamental pond. From the bridal way we passed the horse riding establishment and joined a minor road and then up onto the open ground of Garnwnda.  This gave 360 degree views of the surrounding countryside and coast and a good spot for coffee.

It was a bit of a clamber down to the lower ground but we made it without the use of ropes.

The route then continued along the lane leading past Pant Eglwys to join another minor road.
We continued along here until the footpath leading to the National Trust properties of Good Hope and Penrhyn.  The footpath sign is  misleading as it indicates the path only goes to the cottages but it will bring you to the coast path.   As you descend the path the sea comes into view and we saw the Irish ferry making its way to Fishguard.
This path contains two sets of stepping stones, the first being fine but the second which leads around Penrhyn stops short of a boggy area – I KNOW from a wet experience.

We had lunch on Trwyn Llwyd and it would have been no trouble to have a snooze but it was not to be and on we strode.
We soon reached Carreg Wasted Point where the French landed in 1797 to be captured by a load of feisty Welsh ladies. Just last weekend the glorious Welsh rugby team also beat the French to claim yet another Grand Slam – CYMRU AM BYTH.

We were not the only ones at Carreg Wasted and anothe couple were having a break and told us they could hear a seal who was probably within the bay of Aberfelin.

As we walked on we kept an eye out and spotted about four seals swimming in the clear water.  From time to time they surfaced to look at us. 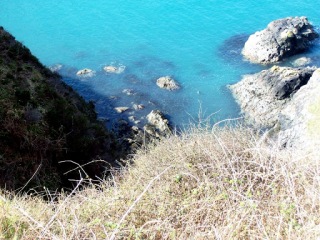 The coast path here does go and down a bit but with lovely views such as the headland below known as Penfathach.

We were now heading back to Goodwick and the car. On the way we passed a beacon brazier, bizarrely supported by British Gas as there was no sign of any gas line.

The tide was right out by now. 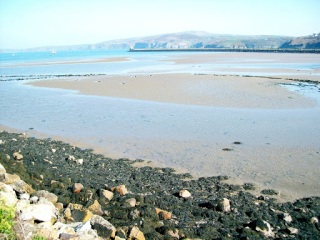 A glorious day was had by us all.