Clearly “The Navigator is not reading my blogs.  He asked on Monday when was the last time you had walked Carmarthen Fan area?.  Quite recently I replied! After a discussion it was decided to continue but use a different route.  The truth be told it is always a beautiful place no matter how many times one walks it.

Near Llandeilo we saw a hot air balloon. 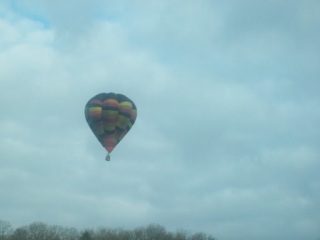 We parked at the usual car park below the filter beds after driving through Llanddeusant – more on this later.

We left the car after commenting on the rather sexy drawing of the Lady in the Lake on the interpretation panel.  No wonder the farmer’s son was smitten!

Instead of walking up the track to the lake we took the stream bed of Nant Melyn and then cutting up on to its steep sides and headed towards the path shown as Gwely Ifan Y Rhiw on the OS map.  This path takes you under Fan Foel and climbs steadily up a narrow path to the bwlch. 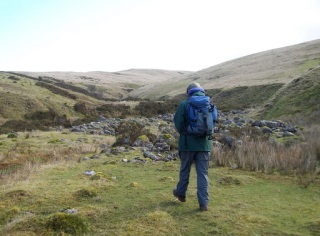 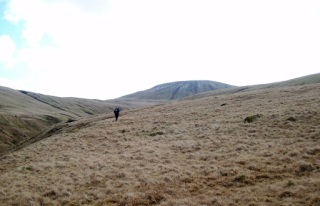 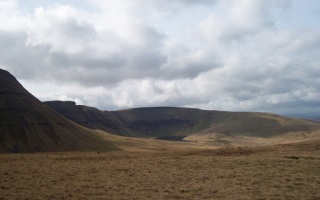 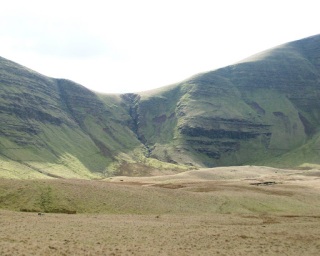 Here we had lunch and could see workmen repairing the footpath on the eastern slope.  Probably pleasant work today but not so when the weather turns.

A number of walkers passed by as we ate, busier than we expected. After food we climbed the hill to our west following the escarpment all the way around  to Bannau Sir Gaer. 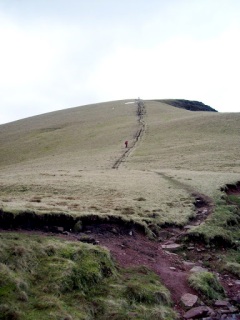 The views went on forever and we could make out the outline of Caldy Island, the Tenby Bay and more to our south Swansea Bay  To the north the Usk reservoir could be spotted.

Our route back followed roughly the Beacons Way through Pant Tyle Gwyn, Carnau Llwydon.  On the way down my eye was drawn to the valley of Afon Mihartach – looks interesting.  We reached the lane below Blaenau Farm. 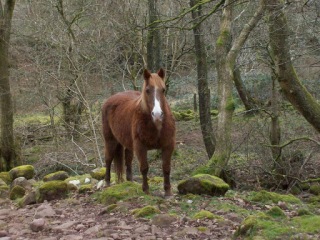 Whilst walking back we noticed that the lane we had drove down had had some repairs carried out but a sign had appeared telling us that the road was closed Monday to Friday apart from residents.  This was a little worrying for further visits as there is no other parking and impossible in the lanes.

The following day I made enquiries especially as The Brecon Beacons Tourism blog for that day had described this particular hill walk using the car park.  I emailed them and was told, after he had made enquiries, that Kevin Walker the writer of the blog, the following

Okay – panic over! National Park inform me that the restriction is temporary whilst Welsh Water resurface the track (well… let’s face it… it did need it, didn’t it!). So a temporary disruption in order to make longer term access easier! Hope this reassures you :o) Kevin.
Why Welsh water could not have made it clearer is beyond me.  We will have to watch to see if the sign is taken down in due course.