Within one week of my first back packing trip I was on my second!

Andy, was coming south to pick up his son who had been staying with us on work experience at the National Botanic Garden of Wales. There was a loose plan to go canoeing or a hill walk on Saturday, but Andy suggested an overnight on Friday and walk on Saturday – perhaps
his wife could drop him off en route and I meet up with him.
We agreed to meet at Llangadog and then proceed to the Black Mountain. The forecast looked promising and I packed my rucksack, this time ensuring I had my bivvy bag!
The plan was to camp near Llyn Y Fan Fach and then walk the ridges and mak
e a return journey below the ridge. Although I am sure it is safe to park the car on the grass at the end of the road which leads to the hatchery I decided to park it at the Red Lion Youth Hostel and walk in. A donation was made and we were off. The forecast pinned up at the hostel was somewhat different to the one I had seen earlier that day and it now looked like rain may be expected.
We set off up the track which leads eventually to Llyn Y Fach, a steady pull up hill into the bowl of the hills which shelters the lake which was very low in water. A quick look int
o the rescue shelter showed that unless the weather was dire it was not the place to stop. Why can’t people take their litter home and leave a place tidy – compare this shelter to the Arenig bothy.
We found a suitable spot on the north

ern shore and erected our respective tarps. The wind was blowing, but not in one particular direction, so the advice to pitch the tail into the wind was hit and miss. Our evening
meal was then consumed and we sat around putting the world to rights – we failed! Before turning in we noticed another wild camper on the southern shore.
Although I had used my bivvy bag on a few occasions it does take some
body distortion to clamber inside the liner then the sleeping bag and the bivvy itself. A little later I realized I was too warm and had a major wriggle to remo
ve my fleece jumper.
Looking out, the mist/low cloud was slowly descending and then rain began to fall but I was pleased that my micro tarp and bivvy bag kept me warm and dry – a result.
I woke at 0545 to see very little and drifted back to sleep until 0730. A leisurely start saw us pack up and begint our ascent up the western ridge and on to Bannau Sir Gaer. By now the weather had cleared with expansive views all around and showing off the red sandstone of the cliffs. 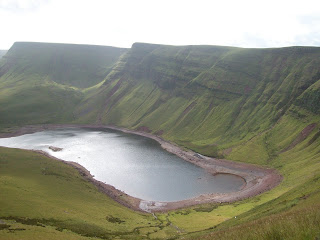 We made our way over the switch back of hills to the trig point and shelter at Fan Brycheiniog. We met last night’s neighbour here who
was on a walking holiday which seemed to take in most of Wales. I suggested the Pembrokeshire Coast and the hills surrounding Llyn Brianne dam as a worthwhile diversion.
We took advantage of a photo opportunity at a steep cliff looking down to Llyn Y Fan Fawr. It was here that Andy took a tumble landing on his ruck sack like a stranded sheep! he was lucky he didn’t fall over the cliff – that would have ruined our day.

At Bwlch Blaen Twrch we headed down on a narrow path which led under the escarpment and then took a line to meet up with the path back to the hatchery and had a stop for lunch.
We inadvertently started a habit on our last walk and finished that walk with a cup of coffee and sticky cake at the Tryweryn White Water Centre. This time we came across a lovely tea room at Blaenau Farm where apple tea cake and coffee refreshed us in the sunshine. For potential customers, this only opens at weekends from May.
Within half an hour we were back at the Youth Hostel and the car. Roll on to the next trip.
I had not used walking poles before this new pastime of mine, but with a heavier pack and of course to hold up my tarp I have found them to be a benefit. However in two trips I have broken two sets of poles, albeit very cheap ones. The locking mechanism has failed on them both. At least I will help the recession by now having to buy something more substantial and quickly.